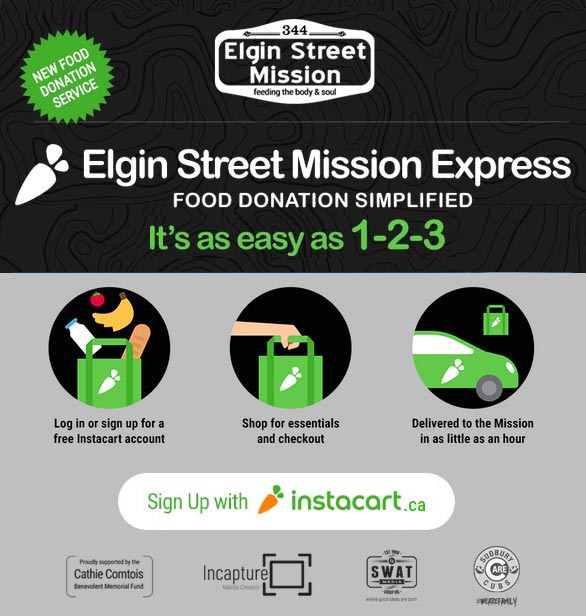 Sudbury’s Elgin Street Mission has turned to grocery delivery service Instacart to make it easier for people to donate the most in-demand food items.

Now, would-be donors can send food to the mission without having to leave their homes. It functions the same as personal grocery deliveries, except that the recipient address is instead set to the mission.

“It’s just an easy way for people to be able to give, to contribute in a meaningful way, and do so just from their computers, wherever they are,” she said.

The Elgin Street Mission has provided meals and access to hygiene for vulnerable Sudburians for more than three decades. Instacart is an app-based grocery delivery service that lets users select the items they want from stores, with gig workers filling the orders.

Donation process ‘not at all complicated’

Sending food donations to the Elgin Street Mission works the same as ordering groceries through Instacart. Donors register for an account, select the food they want to buy, and choose the mission as the recipient address.

Deliveries normally arrive within an hour.

To ensure the contributions are as meaningful as possible, the mission posts a list of its biggest needs on social media every Monday. Donors can consult that list and help the mission better plan its meals, using its resources more efficiently.

Robichaud said feedback from the early adopters has been positive. Donors have described the process as “simple,” “user-friendly” and “not at all complicated,” she said.

“I think it could really change how we donate,” she said, “and I think it will actually increase the amount of donations that people give.”

Reaching a broader scope of donors

One of Robichaud’s hopes for the new service is that it may encourage more donations from across Greater Sudbury and its outlying communities, not just from those who could make drop-offs in the downtown core.

She also said the app model should help the mission reach other age groups that are underrepresented on donor lists.

“I think it’ll help with the younger demographic who does want to give and wants to do something. But they’re busy, they have family, they have commitments, they have lots going on,” she said.

Robichaud credited the mission’s webmaster, Rick Comtois, for sharing the idea of using Instacart to collect food donations. She said she wasn’t familiar with other food security organizations using the tool in a similar way, but news stories suggest some operations across the continent, mainly food banks, have embraced the technology.

Instacart itself runs a #GiveFromTheCart campaign in select cities to support food banks.

Robichaud said she hopes other food security organizations in Sudbury and beyond will embrace technology to improve their donation rates.