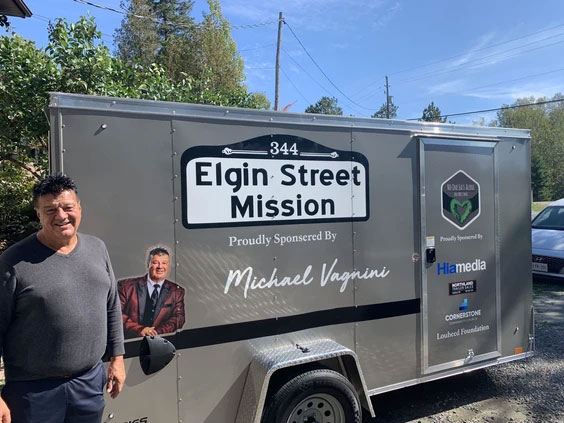 Ward 2 Coun. Michael Vagnini is launching a clothing drive – eventually, it will become a city-wide initiative – in conjunction with the Elgin Street mission.

As part of the endeavour, he said he plans to purge his own closets. City hall watchers will know Vagnini in part for his robust collection of flashy, sparkly jackets, some of which are best viewed with polarized sunglasses. On more than one occasion, he has been likened to Liberace, the musical sensation and louder-than-life personality known for his flamboyance.

“There will be a lot of sparkly coats coming out of my closet this winter,” the councillor joked. “We can have lookalike contests.”

Noting many homeless people have not had much opportunity for self-hygiene during the pandemic, which includes washing and changing their clothes, Vagnini said this is the time to start something new that could help members of our community.

“This is a time of need and this is a time when we can give something back to somebody who really needs it,” he said.

Vagnini said the response so far has been impressive.

“I’ve never had the response we’ve received already,” he said. “I’ve had people call me to tell me they have clothing. It might be because they’ve been storing it through the pandemic or they haven’t known where to take it. We’re offering that option to them.”

Nothing will go to waste. Vagnini said if he receives children’s clothing, it will be passed on to Better Beginnings Better Futures in the Flour Mill. Other items that fall outside the scope of this new venture will be shared with partner organizations.

The councillor will be unable to hide now. Vagnini recently purchased a trailer for the clothing drive (at his own expense) and had it outfitted with decals advertising the initiative. He has already put the trailer to good use with a load of donations from the retirement residence in Lively.

“We’ve already taken one load of clothing from the Walden seniors and the stuff is just great,” he said Thursday. “You know, they talk about old clothing – it may be old to the individual, but it’s new to somebody else. The clothing we’ve gotten already is really spectacular stuff.”

The Elgin Street Mission will set up a viewing room where patrons can peruse items and take what they need.

For those interested in donating, Vagnini is requesting residents call him at 705-562-4562 and leave a message; email him at michael.vagnini@greatersudbury.ca; or check his Facebook page.

Vagnini said he and his volunteers are considering accepting Christmas gifts, in addition to clothing.

“There are a lot of toys that people receive and play with for a week, and then those toys get shelved,” he commented. “We want to be the alternative to that shelf. If we can put gifts under somebody’s tree that are slightly used, I think that’s a great opportunity.”

The clothing drive launches with an event Saturday from 10 a.m. to 1:30 p.m. at the Walden Home Hardware on Municipal Road 24. Never one to turn away from a celebration, Vagnini said the day will include draws and children’s games.

“Our theme is, ‘make giving fun for everybody involved’,” Vagnini said. “For the people giving, it gives them a chance to clean out their closets with slightly used clothing. For the people getting it, it’s brand new to them. And for the people helping, it comes from the heart.”